In Conversation with Mark Knight

DJ, producer, label owner and businessman: Mark Knight has proven a rare and wonderful breed of musical heavyweight. The second highest-selling Beatport artist of all time (with no less than eight No.1’s) his career has spanned more than a decade, with releases on a diverse range of labels such as Suara, 1605,  Stereo and of course his own Toolroom. Despite his success, the Grammy-nominated artist has never rested on the laurels of being one of the industry’s most respected and accomplished international players, and continues to push boundaries and set new standards with each year that passes.

Armed with a musical library that knows no boundaries, a consistent run of hits and chart-topping ventures alike, the success of Knight’s recording career is matched only by the credibility and integrity maintained throughout his discography to date. Heard through a spread of anthems (‘Man With The Red Face,’ ‘Alright’, ‘Downpipe’ and his summer smash ‘Yebisah’ which we premiered on Data Transmission) along with producing bands such as Faithless and Underworld has sealed a diverse musical heritage for the accomplished producer. It’s music for passion, not numbers, and it’s what Mark Knight does best.

Mark takes Toolroom Live to their London Residency at Egg London this Saturday on October 1st, so we sat down for chat with him to discuss Ibiza, Production, Toolroom Academy and the state of house music ahead of the gig..

In terms of production, it’s been another huge year for Toolroom- Yebisah, Weiss ‘You’re Sunshine’, Rene ‘Mind, Body & Soul’, Hannah Wants ‘Just’, Mambo Brothers ‘Momento’, CamelPhat‘Trip’, several releases Ben Remember, plus Roger Sanchez on Toolroom Trax & your collab with Indiana & Adrian Hour at the end of last year – have there been any personal highlights for you?

It’s fantastic to see the label thriving. It’s been going a long time now, and even though it shows no signs of doing anything but continuing its success, I try really hard not to get complacent. So every year starts with that same drive and passion I had when I started the label: I think that’s pretty much essential when you’re running a label, otherwise what’s the point?

On a personal level, the fact that ‘Yebisah’ has done some well is incredibly gratifying. I really tried to go back to basics on the record, and people seem to have understood my intentions and responded really well. Initially of course it was made as a summer record, but people are still playing and buying it, so who knows, maybe it’ll still be hanging around into the depths of winter!

And on the gig front, there have been so many great shows, but if I had to pin it down to one particular thing over the course of the summer it would probably be the opening party of Cacao Beach in Bulgaria, which is always one of the best gigs of the year. Playing to 5-6,000 people all night long until the sun comes up; it doesn’t really get much better than that. It takes place on a beautiful beach, and all you can see from the stage is people going back right into the sea and literally no-one leaves until the very last record: it’s insane every year, and this year didn’t disappoint.

Toolroom academy launched in 2015. What was the impetus behind it? Has Toolroom directly reaped the benefits of any producers coming through the academy?

What we’re doing with the Academy is offering new talent the chance to learn from REAL artists – producers and DJs who have seen genuine success in their careers.  I think there are a lot of really good educational providers in dance music at the moment, but none who offer the kind of teachers we have – the likes of Umek, D.Ramirez, Rene Amesz, Eelke Kleijn. When I was starting out, I would have loved to have seen how my heroes made music – and we’re offering that exact thing for people who want to make the kind of music Toolroom stands for. We also run events with the Academy, giving a chance for young producers to come and meet our A&R team and see some production workshops. We’ve already signed a couple of tracks from these events, so the Academy is proving to be a really successful new part of the label and we’re looking to grow it even more in 2017.

Has A&R changed in the decade plus Toolroom has been in existence? Has the popularity of DJing – and, presumably, subsequently producing – & the access to music software meant that there are more demos to toil through? Has the demo quality suffered?

In the 13 or so years that Toolroom has been around, the barriers to music production have been dramatically lowered. I think that in terms of allowing more people to experiment with production, that is absolutely a good thing. From a label’s point of view, it has positives and negatives. We get so many more demos now than we did a decade ago, and of course a lot of what we get sent isn’t of the quality we’re looking for. But when you hear that one diamond in the rough, it’s fantastic. Previously if you wanted to make a record you had to invest a lot of time and money in it, so the people making records wanted to make sure they were investing their resources on a quality finished product. That’s not necessarily the case these days, with the result that a lot of the music out there is quite disposable, with not a lot invested in its creation. Having said that, some incredible records have been thrown together in someone’s bedroom in just a few hours! At the end of the day it’s about talent and hard work: if you’ve got both of these in abundance, you’ve going to be successful. In terms of the A&R policy itself, that hasn’t changed since day one. We’re after quality, memorable records that smash a dancefloor and hooks that stay with you.

As a label do you still activity search for tracks? What is the process – if Pete find a tracks he feels is good does he let you know straight away or does he test it first?

Most of the records we release are from producers we’ve been working with for a while, or have had our eye on. We rarely release an unsolicited demo from a new producer, but it does happen of course. The Toolroom A&R guys are at the very top if their game and I trust them implicitly to make the right calls about what records we release. I’ll have final say of course, but it’s rare that we really disagree about a particular record.

You have a Toolroom Live date at Egg on Oct 1st following on from your March date there. Talk about the line-up. Is Egg your London home now? What does it offer as a venue that other’s don’t?

Egg has been a key player in the London clubbing scene for such a long time now, it’s undoubtedly an institution and works perfectly for Toolroom shows. With so many high-profile closures recently, it’s a testament to Egg that they are surviving and thriving, and every show we do there blows me away. The soundsystem is fantastic and the crowd are always super-knowledgeable and up for it: I don’t think we’ve had a bad show yet.

You’re down to play Space Closing Fiesta – where we’ll say goodbye to the club in its current incarnation. It’s a venue you have held residencies at in the past and played many times. What is your favourite memory from down the years?

One thing that will always still with me though is being asked to record the Essential Mix live from the club. It was one of the few times I was genuinely nervous, but that just added to the electric atmosphere: that was a special night. It was fantastic while it lasted and we were fortunate enough to have a residency there for many years.  I must have done 100 shows there and I can honestly say I’ve never had a bad experience in all that time. It’s an incredible legacy to have been a part of and the Closing Party is going to be an emotional farewell!

How do you feel about the situation with Pepe outgoing & Ushuaia group taking over?

Space has been a unique venue for 27 years and of course it will be missed. But as one door shuts, another opens: things are always changing and that doesn’t have to be a bad thing. Nothing will ever be able to directly replicate Space and people’s experiences there, but now there’s an opportunity for a different venue to make its mark in a completely new way. Pepe clearly knows a thing or two about creating a successful brand around his venues, so it will be interesting to see what they do with the club.

Basement Jaxx – Jump N Shout (Erik Hagleton Remix)
A wicked edit of one of my favourite Basement Jaxx records that just works every time I play it.
SIS – Cocou
A producer who’s been making quality records for years and whose tracks are pretty much a constant presence in my sets: this is yet another winner.

Housetronix – Vozes Da Savana
Housetronix is a production duo coming out of Moscow and this is a wicked tribal vibe track with some beautiful melodic elements.

Adrian Hour – Love Something
New and unreleased from my man Adrian Hour, this is yet another example of why I think he’s one of the most talented producers out there. Just killer.

Steve Silk Hurley – The Word Is Love (Erik Hagleton Edit)
A second outing from Erik in this chart, this time taking on hallowed material with the Steve Silk Hurley classic… and absolutely nailing it.

Ramon Tapia – Move One
Another producer who has achieved an unbelievable level of consistency over the years, Ramon’s latest record is a straight up banger.

Monte – Paper Wings
A producer hailing from Hamburg, Monte has been really impressing me with the intricate melodies in his records, and this follows the same suit – just great.

Dave Clarke – Wisdom To The Wise (UMEK Remix)
A new remix from my good friend UMEK on Dave Clarke’s fantastic original, this is how techno should be – pure and simple.

Kostas Maskalides – What U Need
This never fails to send people crazy, that looped vocal and punishing kick drum just does something to people. A devastatingly good record. 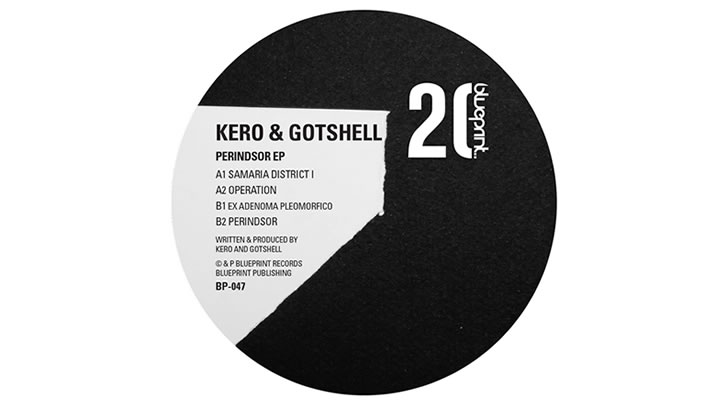