Bryan Black has never taken the expected route. Now a purveyor of tough, industrial techno as Black Asteroid, Black had previous incarnations in a rock band, techno duo and was even an engineer in Prince’s studio. Now he is launching his most ambitious and far-reaching project yet. Pitch Black will merge the US producer’s love of music and fashion into a new all-encompassing project that will include a record label, world tours and podcast series. With a highly distinctive visual aesthetic intertwined with fashion, art and music, Pitch Black is the clearest and most idiosyncratic artistic statement from Black Asteroid to date.

With the first Pitch Black shows already chalked down as a huge success in North America, Data Transmission caught up with the auteur to find out what the future holds for Black Asteroid and his groundbreaking Pitch Black project.

Pitch Black looks like a big project. How long were you working on the concept and how did you find getting it off the ground?

For a few years, somewhere in the back of my head, the gears were always spinning. I was always fearful of the enormous commitment to start a combined label, event, tour and podcast. The world doesn’t need another podcast series. But I discovered my vision for these things is very different to what’s out there, and I was convinced by some friends to take the dive. There is something so empowering when you do your own thing, on your own terms.

What is your ultimate aim with the project?

I would love to have a tribe of like-minded artists working together and blurring the lines between techno, art and fashion. These are my interests and I discovered the only way to achieve this, would be to do it myself. Ultimately Pitch Black is an outlet for me to explore these avenues. Up until now, I’ve been at the mercy of other artists’ visions- playing for someone else’s events and releasing on other artists’ labels. The next logical step is to showcase my music the way I want it to be seen and heard. I really appreciate the visual side of music and want to push those boundaries.

What made you want to start a new project in the first place? Starting a new cycle within your long career just seems to be the way you prefer to work. Is that true and if so, why?

I’m so envious of artists who have long and successful careers with a single project. I suppose I felt trapped when I was at the mercy of other’s visions, working in bands. I started my career as a solo artist and now I’m back to being a solo artist again – as Black Asteroid at least. Over the last 10 years I learned and experienced so much working with others, I recently felt ready again to do it on my own terms. It’s the best feeling in the world.

How was the inaugural Pitch Black tour of North America? Which gig really stood out and why?

Great. I think New York was the highlight for me. We had wrap around visuals behind us- visuals that we put together with Rick Owens runway videos and other elements. Also working with a live singer (Cold Cave) during my set was really exciting. I’ve always missed that element of danger and anticipation in techno sets, and had been forever dreaming of doing something like this, so that was great to finally explore that avenue.

Where are you looking forward to taking the tour next?

Europe. I think the next stop will be Paris, during fashion week in January. We are going to throw a big techno party for the fashion crowd and invite the techno heads also. In the years that I’ve been going to Paris for fashion week, I’ve never witnessed a techno event, I’m very curious to explore merging these worlds together. It seems like they should already be working together, but this is where Pitch Black comes in.

When will the Pitch Black label start to release music?

In the coming weeks we will put into production the first release. There is no plan to have a steady release schedule, but rather focus on special 1-off releases when inspiration strikes. Our goal is to collaborate with visual artists on packaging and make unique products. I really love holding a physical product in my hands. Music should be appreciated by all the senses.

Who have you got on board for the label so far? Will you be focusing on new talent or will it be a mixture?

At the moment it’s just an avenue to release music from myself and others I’m collaborating with. It might even become more than music someday, but it will never be a traditional record label.

How important has creative control been to you throughout your career?

Very. Only because I haven’t found many others that I can trust completely with creative decisions. When I find these people, I keep them close by.

So traditionally I design the art and write and produce the music. For my debut album, I have found myself collaborating with vocalists where for the first time I’m not writing lyrics and melody. I think the perfect scenario is when I have complete creative control and can give some control to others in the right moments. There is power in collaboration, which has elevated my music recently. Vocalists such as Cold Cave, Zola Jesus and even Martin Gore from Depeche Mode have taken my tracks beyond anywhere I could go by myself. I also learned so much by collaborating with Chris Liebing on this album. Most of my tracks are mixed by Howie Beno. Howie and I both came out of the Midwest USA Industrial scene. He appreciates the industrial sound I incorporate into my tracks more than anyone.

Your journey has been an unusual one for techno. Do you think that has been an important factor in forging your distinctive sound?

Yes I think because I come from a song background, I make techno in a classic song arrangement format. For example, most of my singles are 4-5 minutes long. I don’t write with loops. I usually arrange songs with a verse-chorus-verse-chorus-middle 8-chorus-outro format. I get bored if the music doesn’t change or go somewhere.

In what ways do you think your background in rock instilled you with a different attitude, approach or work ethic to people who have always been in techno music?

I approach my sets in the same way when I was in bands. It’s a performance. Many in techno think you have to be faceless and play 14-hour sets. I take a different approach, but I have been known to play extended sets also. I like playing with the format.

In what ways do you think fashion has influenced your music and what are you excited about in bringing them together in Pitch Black?

I started hearing my music being used on runway shows by some amazing designers. I was thrown into that world almost overnight by accident. My music hasn’t really changed, but the art and videos are more inspired by fashion. I’m collaborating with fashion designers on the packaging of Pitch Black and Black Asteroid releases.

Why is the visual aspect of music so important to you?

I was a graphic designer before I made techno. It’s something that I can’t shake; I’m always drawn to design, architecture, and fashion. All of my favorite albums come with amazing art and packaging and music videos. That is an essential part of the music for me.

What have you got in stall for you new album? Has there been a change in direction? When can we expect it to drop?

I’m working with vocals more than ever on this release. I think half the album is vocal based and half is instrumental. Every track has a techno pulse running throughout. Some of the instrumentals are more abstract and atmospheric, as I wanted to explore the space-astronomy angle more on this release. I suspect we will pull a few singles from it with remixes and videos. It will probably be the focus on 2016 for me, with a release in the early 2016 and singles released throughout the year. 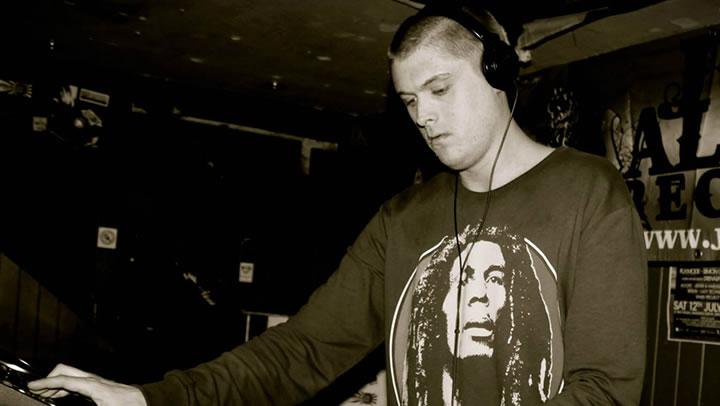