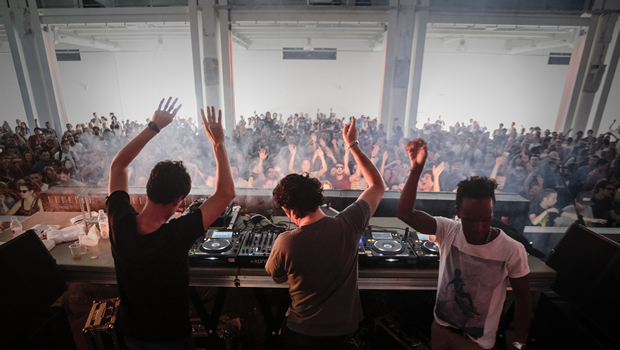 Can you differentiate for us between the kind of production work that Phillipe Zdar was able to offer over Alex Kid?

They’re both really good; they have different sounds and different things that they are each really good at. I gave some different stuff to Phillipe (Zdar) for which I wanted to have a really nice surrounding and a lot of deepness in the mix and that’s what he did. Alex Kid, I gave him more dancefloor tracks to sound really good in the club.

You know, Phillipe Zdar for example, he doesn’t normally mix electronic music but sticks to working with bands like The Beastie Boys or Phoenix to name a couple. He’s a good friend though and likes what we do so I asked him to be involved and he was more than happy to be. He listened to the album, he liked it and decided to mix a few tracks for us.

Cool. I’d like to go back to talk a bit about the Apollonia sound as it is very unique but then you will play at nights such as Enter in Ibiza last summer for example. Summer 2013 you guys decided only to play at DC-10 on the island, which is a perfect fit for the Apollonia sound. To play a different type of night do you adjust your style to suit the night?

The most important thing is the club and the audience rather than the night. We never prepare our sets, they are totally improvised, so we really play as a consequence of what is going on in the club.

Some artists have a very specific sound for which people will travel, regardless of the night or the venue, fans will come to hear the particular sound of that artist. Whereas many artists will change their style to suit the occasion.

I think it is the same for us. Just the slight caveat is that our style is many styles so we can still adapt ourselves but no, I’m not going to play minimal techno because I am at Enter. I don’t think that Richie Hawtin books us for that, but he wants to have us at his party.

Right, and you guys played the terrace so the right part of Space for your sound.

Yeah, it was really good for us. Perfect.

No doubt part of the album will have been ready or at least in progress over the summer season. What has become your favourite track for the dancefloor?

Honestly, I like all of them but I would say that at the moment I am into “Boomerang”. It’s a very simple track, based on a loop but the kind of loop that you could listen to for hours and makes you feel really good.

Boomerang is a beautiful track. Which other tracks have been received particularly well on the dancefloor?

“El Senor Vador” gets a great reception from crowds. 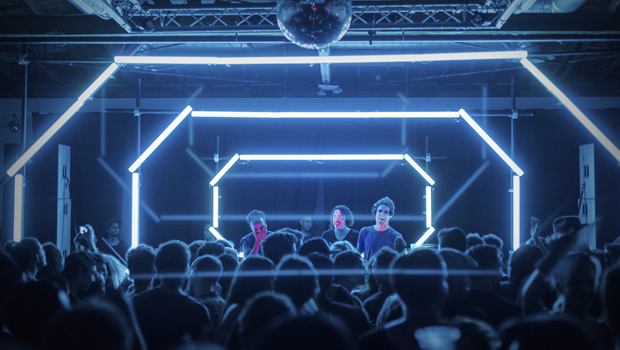 The album has been released on Apollonia, your own label. If you had had to release on another label, are there any that spring to mind?

To be honest I’ve not even considered it. I’m not really too sure because we really wanted the album to feel homemade and we also wanted to control everything including distribution and promotion and so I cannot really answer this one because the main thing we wanted to release it ourselves. Perhaps in the future I would think about other labels but I couldn’t quickly give you my three favourite labels. I think it’s in the right place though.

So many artists at this point would be starting to consider “Apollonia Live”. Is that something that may be on the cards?

No not at all. Not now because as mentioned, this first album is the mirror of our DJ set. Our thing is DJing, this back-to-back-to-back setup whether short or long sessions, you cannot do with anyone. I do it with my two best friends under the name of one artist, Apollonia. I think this is what people like and it would be a very different story to do a live set.

Ok, so no live set in the near future. A quite substantial number of DJ sets to usual however at the moment. Which parts of the world has the tour taken in?

Following North America, we went to Brazil for two gigs, the weekend after was in Colombia and Peru, then several gigs in Europe through to the beginning of January. For New Years Eve we are back in the States for a gig in New York and then off to Miami again for the 2nd January. Then we are at BPM in Mexico, returning to Brazil thereafter and then playing in Chile for the first time. We then return back to Europe and in February we do five gigs in Australia, finishing in Japan after that. In total it’s around 50 gigs.

And you are in London this weekend at Fabric. Do you think you’d like to play elsewhere in London at some point?

Fabric is one of our favourite places and it’s difficult to compare anywhere with Fabric with regard to the vibe, the soundsystem, the crowd and everything really. It’s a great club. For London we are probably going to play some festivals next summer too though.

Finally, touching on future production projects. Whilst there are three creative minds making up Apollonia, would you consider collaborating with someone also?

We are pretty close to The Martinez Brothers. When we were in New York we had Jovonn from New Jersey in mind, who has previously released on our label. He’s one of our favourite producers from the 90’s and we are thinking of perhaps working in the studio with him one day.

Cool what else is in the pipeline?

We have a new release from Premiesku on the label and also a release from a new Berlin based producer called Diego Krause. We have just signed an EP from this guy, which will be coming out in 2015.

Catch Apollonia at Circus, Liverpool on Saturday January 31 to have their trademark house enthused sounds help you shake off those post New Years blues.

Apollonia Tour a Tour is out now on Apollonia Music. Grab a copy here: http://geni.us/ApolloniaTourATour and don’t forget to become a fan on facebook keep up with all thing Apollonia: www.facebook.com/ApolloniaMusic