Lee Burridge’s rise to fame isn’t your usual success story. Instead of gradually making a name for himself back home before conquering dancefloors overseas, Lee made his big break in Hong Kong in the early ‘90s, entering dance music history as one of the pioneers of the former British colony’s burgeoning scene.

Today, he’s known to many as a master of extended after hour sessions, and that’s exactly how he laid the cornerstone of Hong Kong clubbing with his residencies at famed venues The Big Apple and Neptunes, where he’d often keep playing until the afternoon. His emotive and dreamy house changed the direction of music at Burning Man as far back as 2006, which proved to be another turning point in his career. His seven to ten hour sets on the final day is still one of the Playa’s best kept secrets.  Five years after popping his Burning Man cherry, Lee launched a new event series, dubbed All Day I Dream, by throwing a party on a Brooklyn rooftop under the scorching sun in 2011.

Fuelled by Lee’s Burning Man following All Day I Dream flourished one party at a time, quickly spreading from New York to LA, Berlin, Moscow, Mexico, Australia and London. Launched simultaneously, the All Day I Dream label (check out our recent premiere here) has been pushing the daytime experiences’s emotive soundscape since day one, landing releases by the likes of Matthew Dekay, Yokoo, Gorje and Izhevski, Lost Desert, Daso, Bedouin as well as Lee himself.

Five years after its launch, the famed party is just about to make its debut at Amsterdam Dance Event on Saturday October 22nd, taking over a disused tram depot for a special eight hour daytime session, soundtracked by the party head honcho himself, alongside Gorje Hewek & Izhevski and Lost Desert, you can grab tickets here

I guess I was around fourteen years old when I saw my first DJ play. My parents ran a country pub in the south west of the UK, in the depths of Dorset. One Christmas time someone decided we were having a party in the bar. A mobile DJ called Steve Smith (of the Steve Smith roadshow) was hired. Equipment was set up. Flashing and scanning lights. Two speakers. A bubble machine and two belt drive turntables with an awful lot of buttons in between. I’d never seen anything like it. I was entranced… and it wasn’t even switched on at this point. I spent the whole evening backstage, VIP, watching a DJ play seven-inch records and speak on the mic. Within a year I talked my dad into helping me build and buy some equipment. I already owned a bunch of records, as I’d been obsessed with music since I was a kid. My first turntables were belt drive (meaning if you tried to hold the record to cue it up the belt fell off and the turntable stopped working).

A few years later after learning to drive, learning to play music at people’s weddings and kids birthday parties I started playing a local nightclub. It was called Scruples and was in West Bay near where I lived. Ten miles away was the shimmering jewel in Dorset nightclub’s crown, the palace. It had an ‘award winning lightshow’ and blue cocktails. I was sold (come on, I was from the countryside). I finally got to play there after giving them my mix tape. They gave me Monday nights which was the under 18’s. I graduated to the weekend soon after too. First off it’s where I saw a DJ actually mixing records together. Wayne Rideout showed me how to “blend” 12” records, it was a revelation. We played together for a few years until one night a man named Robert (who was randomly visiting the area due to his daughter’s wedding and was scouring the nightclubs looking for a new DJ for his club in Hong Kong) gave me his business card and said to give him a call if I was interested in moving to Asia. I had no real idea where Hong Kong was at that point but a few phone calls later and I was hired. I moved to HK on my birthday in 1991. I decided I would go and check it out and would stay six months, even if I hated it. I loved it. I stayed six years. HK gave me the opportunity to become a full time DJ. I went to play in a commercial bar but was also lucky to be in the right place at the right time for dance music there. I had a box of all my favorite tracks from ‘87 onwards and started doing small Sunday evening raves for travelers who found themselves in HK during their adventures. HK was a wild and amazing place and after my two-year contract was up in the commercial bar I got to focus on dance music. It’s where I cut my teeth and learned to play long long sets playing 7 -10 hours every night of the week.

during the same time, I was living in HK I heard whispers of a magical beach in Thailand. I traveled to the south of Thailand and discovered Haadrin in Ko Phangan. Basic accommodations, two hours electricity a day, gorgeous nature and a small and amazing community of cool people. Paradise! There was a DJ playing dance music off a double cassette player and hippies playing drums on the beach for full moon. A little trip back to HK to collect my records and I became part of the small group of passionate artists creating the earliest full moon parties on the beach. Add in a couple of weekly parties at the Backyard Club playing alongside other resident DJ’s like Backyard Dave and I was lucky enough to have played for months at a time each year from 91 -2000. I was lucky to be part of a beautiful community of people who also stayed there. I learned how special playing music outside in nature was. I fell in love with these kind of parties and it stayed with me until this very day.

The last couple of years I spent in HK the scene was on fire. International DJ’s came through on a weekly basis. two that I became friends with were Craig Richards and Sasha. Both urged me to come back to the UK, and as the handover from British to Chinese rule was happening in summer 1997 I decided it an opportune time to leave so I returned to the UK to embark on a new adventure. the first year was really hard. I’d met so many DJs and managers in HK but most didn’t return my calls or help as they’d promised but Craig did. He even let me stay on his couch early on. Sasha was friends with Craig and had asked him to create an event that he would headline. Craig had been promoting events in London at that time. They kindly asked me onboard and Tyrant was born. It really opened the door for me in a big way. We held the first events in London in warehouse spaces, then moved to a club called The End and then eventually to fabric where we held a monthly residency for six years. We also had a residency in an amazing small club called ‘the bomb’ in Nottingham. Through Tyrant I was given the opportunity to have people see me play and build my following. Craig and I played back to back and created our own thing alongside Sasha. He was such a huge artist at that point that getting any sort of recognition from his fans was hard though we really stuck with it and carved our own space and our own fans. After Sasha departed the project, Craig and I picked up the mantle and took Tyrant to new heights. We put out several mix CDs that, at the time, were very different from what was going on in the UK and it opened the door for me globally.

All Day I Dream:

I’ve always been drawn to atmospheric music. Music with melody and a certain melancholy. I’d started collecting a bunch of music in 2007 that went on to form my mix for Resident Advisor. I played these tracks at an after party in Mexico during BPM festival. I then played my first set in this style at Lightning in a Bottle festival. I wasn’t really that excited about where music was at that point so in 2011 I decided to start my own thing. All Day I Dream was born on a rooftop in Brooklyn. I believed in the music and simply wanted to share it at an event. It felt more day time than night, it felt like it should be heard outdoors on a good sound system. Over the past six years the event has gained momentum and given me a new platform to express a certain musical part of what I want to say. it’s a label where I can support and help artists I admire and an event that’s growing in popularity each year a little more across the globe. 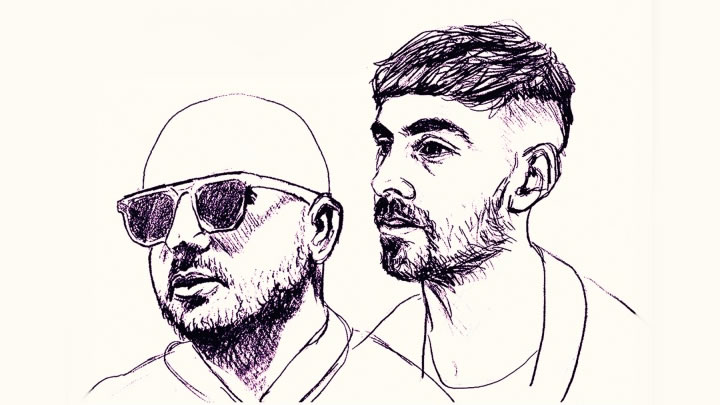